The Fed meets May 3 to set interest rates and although no one expects a rate hike at this meeting, investors will be looking for clues as to what happens at the June 14 meeting where the market expects a quarter point hike with 60% probability. This week we saw weaker data from the US in the GDP, PMI and inflation reports, however, these are small pullbacks within a robust trend. We think the Fed will be equivocal and await more data, while managing expectations up to the June meeting. As for the probability of a June rate hike, unless there is sudden significant weakness in data, or a precipitation of political risk, the probability will remain high. The Fed historically does not reverse course until some kind of event causes a reappraisal of policy.

Next weekend we have the second and final round of the French Presidential Elections with polls indicating roughly 60% support for Macron and 40% for Le Pen. For the moment at least, the election appears safe, but previous experience has taught us that anything can happen. Globally, the political front remains fraught with tensions in North Korea, Afghanistan, Syria and divisions in Europe. A meeting between Juncker and May regarding Brexit was thought to have been more contentious than official pronouncements would have it.

In the US, however, a government shutdown was averted by a bipartisan agreement on the budget which would buy another six months to agree a new budget ceiling. Notably, Congress struck a more conciliatory note between Republicans and Democrats than the White House would have done. There was no mention of the Mexican Wall and compromise was reached to accommodate Democratic interests.

Oil prices have been weak in the last two to three weeks, down some 8%. The oil market has ignored increased US inventory draw and focused on gasoline and distillate build instead, an indirect and volatile signal.  In fact, the oil market has mostly ignored bullish signals and focused on bad news. The longer term prospects for oil, however, remain solid. 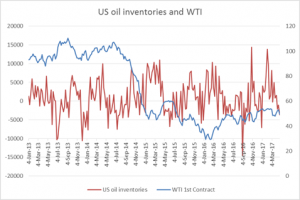 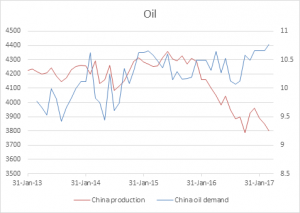 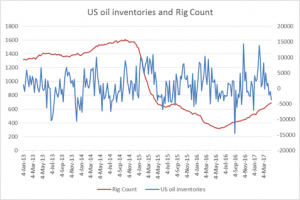 China demand (circa over 11% of world total) rising faster than production. (source Bloomberg).

Insights
Weekly Wrap May 25: The Fed, Inflation and European PMIs