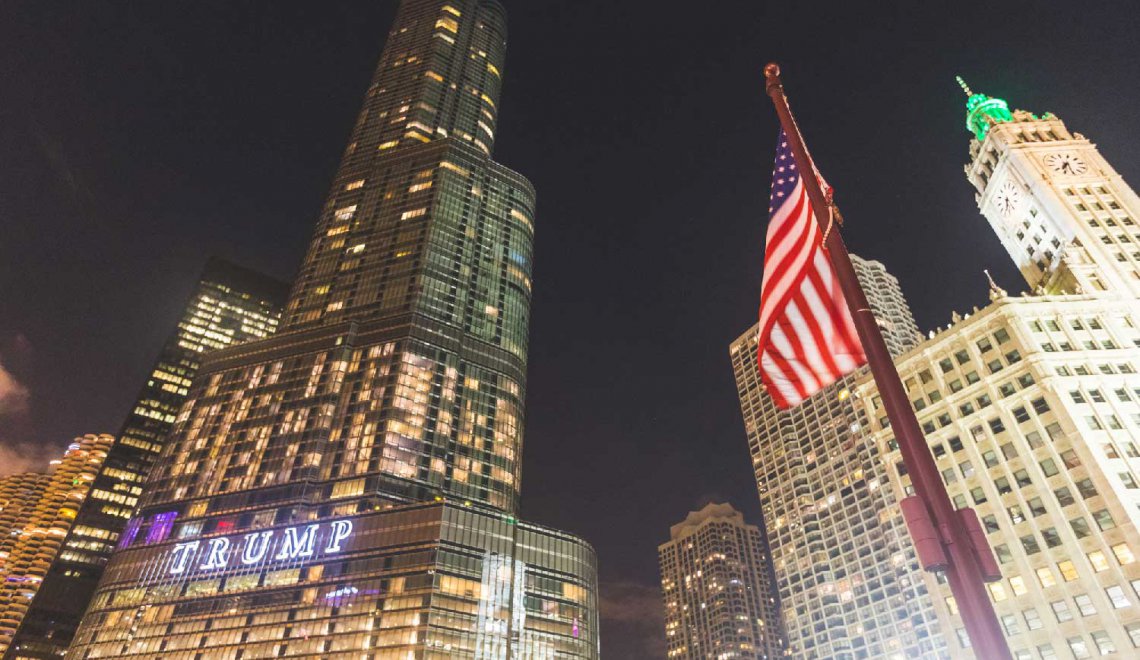 Donald Trump is off on his first foreign tour as US President. So far the visit to Saudi Arabia has been successful and gaffe-free while securing multi-billion dollar deals. At home, the President faces a more difficult time. Ex-FBI director James Comey will testify before Congress; the mixed messages and confusion around Comey’s firing and the FBI’s investigation into Trump’s Russian entanglements continue.

The US: It’s complicated. Cautious US equities, positive US mortgages and bonds, reducing leveraged loans.

US growth continues on a steady path. While the Empire State manufacturing index fell, the Philly Fed manufacturing index and industrial production data indicated sustained growth. We note that the US economy was on a stable growth trajectory well before Donald Trump became President and proposed fiscal stimulus, which was only necessary if the intention was to run the economy beyond its sustainable natural rate. US equities and credit markets had priced in a boost to growth, which is as yet not fully unwound. The dollar trade and the reflation or duration trade have mostly been unwound. Therefore, we must conclude that the risk reward for US risk assets remains somewhat poor, whereas the outlook for the dollar and for short duration have been restored. Equity markets tend not to reverse into bear trends because of valuations, however. Markets reverse on earnings cycles, exogenous shocks, and liquidity conditions. The items on the radar are the integrity of the US presidency and Fed policy. The Fed’s rate hike trajectory is sufficiently gentle for the market to absorb it, provided that it does not translate into credit volatility. We believe that credit volatility will advise the Fed’s realized trajectory and that large sell offs in the credit market will cause the Fed to pause.

Therein lies an implicit put. The matter of reducing the Fed’s balance sheet, which is now on the agenda at least academically, is another matter. The Fed always establishes a marker in the academic purview before it escalates an intention towards an action plan. Reducing the balance sheet could have unpredictable consequences but is still some ways off. Now for exogenous shocks: Donald Trump. The drama unfolding at the Oval Office rivals the unpredictability we expect from Pyongyang. The checks and balances introduced by Congress at least mitigate much of the capriciousness of the President, but it does not make life easier.

The reality of everyday life for investors is that US corporate fundamentals remain strong. From 2014 – 2016 corporate balance sheets were leveraged up but no more. Corporate America is rather unusually, shoring up balance sheets, perhaps in expectation of higher interest rates. There are of course pockets of mispricing, such as in the leveraged loan market, as CLOs continue to hoover up collateral. Loan ETFs compete for issuance prompting the largest wave of repricings in recent memory. The corporate bond market is tight and offers scant value, but fundamentals are improving, leaving investors with difficult decisions. A potential source of alpha is brewing in retailers which are facing difficult operating conditions and will likely fall into distress later this year. For now, it’s a Dutch Auction scenario as investors await lower prices. Then there is the equity market, trading at lofty valuations, and facing slowing earnings growth. Here is an English Auction with a thinning room.

The French elections were the only real political risk and this has now past. British elections will be about the size of the Tory majority, not if they will win. German elections will possibly see an increase in representation for incumbent Merkel’s coalition if not party. Italian elections are still some time away. Equity and credit markets should by rights come to be driven by company performance, a boon to long short, stock picking funds. Yet BTP spreads to Bunds is 1.79, well above the 1% of 2015/2016. OAT Bund spreads have receded from 0.8 to 0.45 but are still above the 0.30 – 0.40 band of 2015/2016. And well they should. They may in fact be too tight, if one considers the bigger picture. France and Germany may choose, Europe, but there is a growing constituency of the disaffected who chose Le Pen, mostly the young and the unemployed. The young will live to fight another day. Europe faces Brexit by 2019, a war they will in all probability win, in what will certainly be a Pyrrhic Victory. Europe’s banks are getting healthier by the day, but do so with glacial reluctance. And without Britain’s pro-business lobby, will the Germans find their voice against Statist France?

For the moment, Europe is in the midst of a cyclical upswing. Trade it. Europe’s companies are some of the world’s most global. They suffered when world trade slowed and they will prosper in the rebound. Europe provides an efficient means of buying emerging market exposure for investors seeking to take money out of EM but not putting money into it. The luxury sector has been a levered China play since 2010, it faltered with China but now prospers with it. Europe’s banks tardiness at cleaning up balance sheets, their endless negotiations with their regulators and the ECB provide good yield opportunities as credit improves sufficiently slowly for more calculating investors.

Investor Complacency? We think not. Stay risk on. 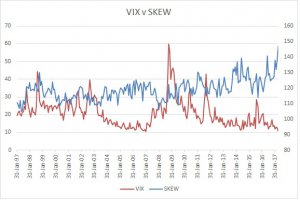 VIX, an indicator of implied volatility for the US stock market, has been chronically low, and surprisingly low given the geopolitical and economic concerns in the economy. Market consensus is that the US stock market is expensive and that growth may not be as strong as expected, especially if the expected fiscal stimulus policies of President Trump are not implemented. VIX, however, gives an incomplete picture of market sentiment. The low level of VIX leads some investors to regard the market as complacent and therefore prone to sharp corrections. An alternative, or more accurately, complementary indicator, is SKEW. This measures the skew of the option volatility surface. Put simply, a high skew is an indication that put implieds are higher than call implieds, in other words, put options are more expensive and call options are cheaper.

Skew is high even though VIX is low. One possible explanation is that call writing by dividend and income mutual funds and exchange traded products is over-supplying call options while investor caution is over-demanding put options. If this conjecture is correct, it is an indication that investors are far less complacent than indicated by simply looking at VIX.

OPEC is in session and May 25 is when they are expected to announce production cuts at least into next March. Anything less will be taken as a sign of weakness. There is no stopping US shale, the free riders who will profit from any production cut. For OPEC, however, a stable oil prices are a matter of survival. The long term demand and supply dynamics favour higher oil prices. In the US, crude inventories are in sixth week of draws and gas and distillate are now in their third week of draws. Increasing rig count is having smaller marginal effects on supply, as expected, as recovery rates decline. What may be more important than all this is that China’s oil demand continues to rise while domestic production has fallen some 9% from 2016 highs.